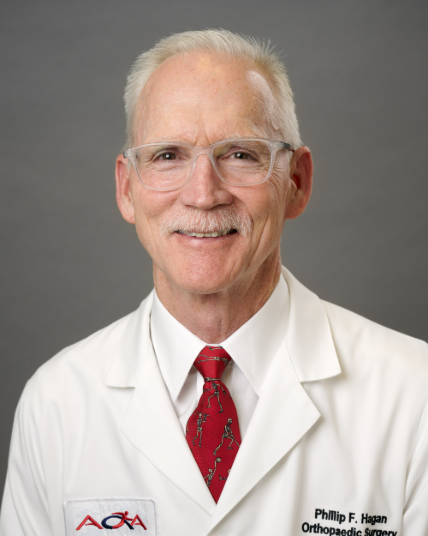 Dr. Phillip Hagan is a highly respected, board certified orthopedic surgeon who joined Advanced Orthopaedic Associates in June 2019. Throughout his medical career, he has garnered a well-deserving reputation for performing at a high level of clinical excellence, and for offering his vast repertoire of expertise in arthroscopy, knee and shoulder surgery, meniscus, cartilage repair, ACL reconstruction, shoulder instability, and labral repair, rotator cuff repair, and total shoulder replacement. As a testament to his professional excellence, Dr. Hagan has held prominent leadership roles at various institutions including being appointed as Chief of Surgery at Liberty Hospital, President of several past practices, and governing board member of an ambulatory surgery center. He has also served on hospital boards. Additionally, Dr. Hagan is a Clinical Assistant Professor of Orthopedic Surgery at the University Of Kansas School Of Medicine- Wichita.

In light of his exceptional academic career, Dr. Hagan completed his undergraduate studies at Creighton University in Omaha, Nebraska, and later obtained his Doctor of Medicine degree from Creighton University School of Medicine in 1986. Thereafter, he completed his residency at The University of Kansas School of Medicine–Wichita in 1991. He went on to complete his sports medicine fellowship at the University of Wisconsin Hospitals and Clinics in Madison, Wisconsin, in 1992. With a commitment to excellence, he became board-certified in orthopedic surgery and orthopedic sports medicine by the American Board of Orthopaedic Surgery.

When he is not seeing patients, Dr. Hagan enjoys fitness, traveling, and spending time with his family.